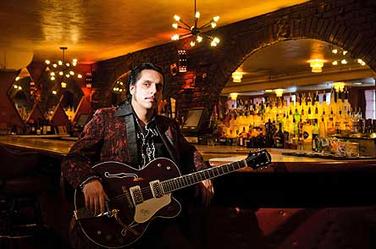 mwe3: What’s your background with the guitar and when and where did you start playing guitar?

TONY SAVARINO: I was born and raised in Boston. My father was a nuclear physicist and my mother is a painter. There was always a guitar lying around the house. Story has it when I was 4 or 5 my parents took me to a flea market and I picked up this guitar walked off with it. My father of course paid for it. I didn't start taking lessons till I was 11. My first teacher was this guy named Ted. He was the music teacher at school. He came to my house. He taught me all my open chords. My first pentatonic scale. He taught me the some Chuck Berry rhythm guitar and some of his signature licks.

mwe3: Can you remember your first guitar and who were / are some of your big guitar heroes?

TS: My first guitar was the acoustic I tried to nick at the flea market, my second guitar was some cheap electric thing. Can't remember the name. It was kind of like a Strat / Jazzmaster copy.

Guitar heroes.... well I have a lot and the list keeps getting bigger! The first guitar solo that kind of hit me was the solo to "Rock Around The Clock" by Bill Haley & The Comets. I first heard that while watching the opening credits to "Happy Days". I then became obsessed with Elvis's "Hound Dog" and some other of his Sun hits and early RCA hits.

Another big hero and still is is Keith Richards. When I first heard "Satisfaction" the guitar sound just floored me. It sounded alien to me. How the hell does he do that? The Beatles have always been a huge influence.

When I got into middle school into high school I started getting more into classic rock/metal: Zeppelin, Hendrix, Sabbath, the first Cult album. I figured out their tunes best I could.

I also discovered Van Halen. That changed everything. Then I discovered Randy Rhodes. That changed everything again. Then I heard Yngwie Malmsteen.. After that I sold my soul to any guitarist Mike Varney put on his label! I really got into shred guitar: Tony Macalpine, Vinnie Moore, Paul Gilbert, Greg Howe, Jason Becker, Marty Friedman... I also discovered Albert Lee he amazed me as well! There are some guitar players in Boston that were heroes: Nuno Bettencourt, Rich Gilbert, Gary Hoey (my rock teacher), Rob Knockowitz, Joe Zucalla (my classical teacher), Stan Corinopolis, Paul Dibartolo (Bang/Spread Eagle). I was a huge thrash metal fan: Metallica, Slayer, Anthrax and Megadeth.

When I got to Berklee I discovered Steve Vai, Frank Zappa, Allan Holdsworth, Scott Henderson, Tommy Bolin and I rediscovered Jimi Hendrix. My teachers there were also some of my heroes: Jim Kelly, Jon Finn and Charles Chapman as well as some of my fellow students: John Deservio, Brian Tichy (most people know him as a sick drummer but he is a sick guitar player as well), Dorian Heartsong, Geoff Unger, Paul Alves, David Steel, Terry Syrek to name a few.

After I got out of Berklee I started getting more into country guys: Brent Mason, Vince Gill and Danny Gatton which turned me on to more jazz players like Wes Montgomery, Pat Martino, Charlie Christian and George Benson. I am also really into cow jazz guys like Hank Garland, Joe Maphis, Speedy West, Phil Baugh, Leon Rhodes. Blues guys like Buddy, BB, and Albert King.

mwe3: What were some of the parameters you had when you set out to create your new Guitaring CD and why did you call the album Guitaring?

TS: The first time I got an itch to record a solo album was when I got into Mike Varney's column "Hometown Heroes" in Guitar World Magazine back in '93. I got too busy touring and put the idea on the back burner then lost interest. I really didn't think I could say anything new with the guitar that hadn't been said already. I also wasn't that inspired. Then I started listening to some of the older country and jazz guys and these albums seemed like albums anybody could enjoy, not just guitar nerds like me. At this point I was doing a lot of sessions for students at The New England Art Institute. I was playing on power pop, singer-songwriter sessions, metal sessions, R&B and Gospel stuff. They have a label called Naked Ear and the president of label Barry Marshall I have known since I was a kid. He was the producer on a lot of these sessions. He encouraged me to make a solo record and said I could record it at the school and he would put it out.

Most solo guitar records I hear fall into one of four categories: shred albums, SRV blues albums, jam band albums and avant gard weirdo jazz albums. I wanted to stay away from that. I wanted something anybody could put on and enjoy, whether you were driving, on a desert island, in a lounge or at a barbecue. Whether you're a guitar player, mom, dad, son, daughter...I wanted to introduce folks to some guitar players I love that you don't hear about either like: Phil Baugh, Joe Maphis, Roy Lanham, Brent Mason. I also wanted to try and interpret some music that wasn't necessarily guitar music on guitar (i.e. "Deep Blue Day" by Brian Eno).

I had a lot of fun with this record. The name came from a guitar student of mine. He referred to guitar playing as "Guitaring." I took it and ran with it. When I like someone's guitar playing I'll say, ‘That was some real nice Guitaring!’ It's this word that just became a part of my everyday vocabulary.

mwe3: What drew you to the Gershwin piece on the album “Rialto Ripples”? It seems like a very unusual choice!

TS: That's a funny story. Barry Marshall and I were brain storming tune ideas for the CD. He says something like ‘pick some simple standards. Like a Gershwin tune.’ Famous last words (lol). He was probably thinking "I Got Rhythm" or something like that.

I started listening to clips on iTunes of Gershwin tunes. "Rialto" comes up and it reminded me of "Got a Match?" by Chick Corea. I figured out the head and down the rabbit hole I went. When I came out the other side it sounded like a mutated Gypsy Jazz thing. Completely non intentional. My band always sweats that song cause it has so many changes!

mwe3: Who plays with you on the CD and do you have a band that you tour with?

The “Syndicate” live experience is a rotating cast. Most of players mentioned from above with some new additions: Conor Smith—Fiddle, Mando, Rusty Scott—accordian and Hammond B3 Organ. Joel Simches—bass, and Yuri Zbitinoff and Jared Seabrook on drums. Another one of my drummers who plays in my band is Mike Piehl. Basically my live band is anyone who can play and is available!

mwe3: What guitars are you playing on the Guitaring album and what are your favorite guitars, amps, strings and effects?

My strings are typically Ernie Ball '10's on the Fenders except the Jazzmaster, I use 11's, all the other are D'Addarios 11’s. I use Dunlop jazz 3 picks.

mwe3: There’s an interesting cover on Guitaring of the Flying Burrito Brothers “Christine’s Song”. That’s an usual way to close an instrumental guitar album! What song comes in after that song that ends up closing the CD?

TS: I'm in a band called Black Fortress Of Opium with my girlfriend Ajda. It's kinda of like Nick Cave meets PJ Harvey meets the Velvet Underground so this tune might not be a good fit for the band. She's from Texas and loves a good country tune. That tune came on the local college radio station WZBC one Sunday morning while we we're driving. We really love the tune and I wanted to include her on the CD so I asked her if she would oblige me.

TS: Well I keep praying to the guitar gods for a pick and string endorsement! (lol) Beyond practicing, teaching my forty-something private students, doing local sessions and gigging with a wide range of artists, I am currently recording the follow up to Guitaring called Guitaresque. We should be mixing by August and have that out in late fall! I am very blessed to have my life full of Guitaring!
​ 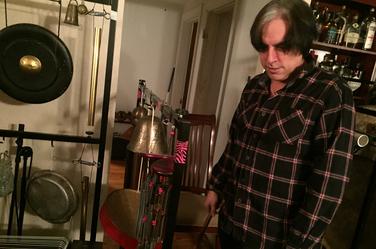 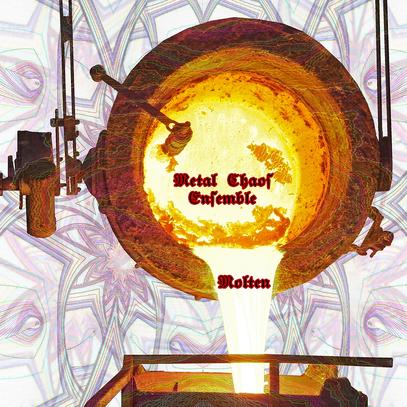 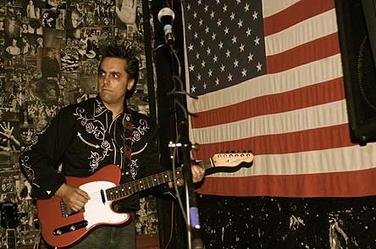 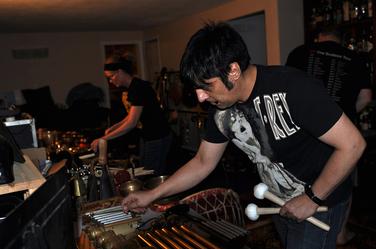 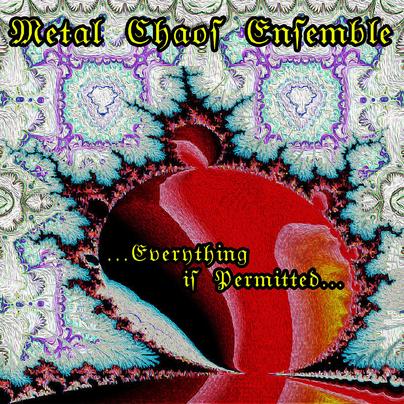 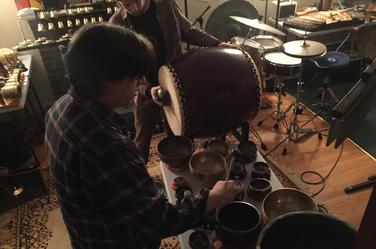 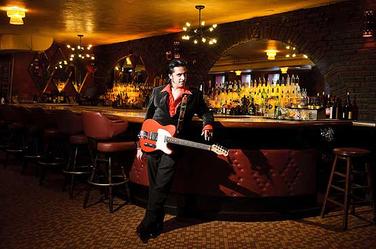