After I finished the review, I reached out to PEK and asked a few questions about how Leap Of Faith regrouped and what I got back was so interesting that it is being presented without editing. I'm in bold:

In 1999 I changed to a different day gig which paid much better but was very demanding on my schedule.  After a few years of trying to stay as busy musically as I had been for the previous 10 years, I got exhausted and went into retirement from performance.  Glynis continued to be active with others during my absence from the scene.  Although I stopped performing, I did not stop listening and continued to collect New Music.  I became a frequent customer of Downtown Music Gallery – I have now read and purchased music from their list every week for many years.  In Early 2014, when I was in Manhattan on business, I went over to DMG and had a very interesting conversation with Bruce Gallanter, who knew me at that time only as a customer and not as a musician.  I told him about Leap of Faith and arranged to send him some discs on consignment.  I sent him about 15 titles of discs that I produced in the 90s or early 00s, he wrote up reviews for about half of them and sold virtually every copy.  I have since sent him a batch of new titles with more to come.

I realized that the climate of music distribution has undergone a dramatic transformation during my absence from performance, and that it was now possible to use the internet to reach a much broader audience than the Boston area audience we reached when I was active.  I was inspired by that realization to do two things:  1) Mine all of the releasable recordings from the early period performances and prepare new CDs and download files.  2) Reform Leap of Faith and resume performing and recording.

The Leap of Faith back-catalog is now complete and posted on the Evil Clown Bandcamp page at https://evilclown.bandcamp.com/.  There are 10 or 20 or so albums by other PEK ensembles and projects that are still pending.  In addition, I have offered to put recordings from Glynis’ ensembles on Evil Clown and she is going to discuss with Eric Zinman from New Language Collaborative which recordings may be appropriate for that band.

Leap of Faith is a partnership between Glynis and myself that has had a number of primary incarnation and many guests.   Without Glynis, I would never call any ensemble Leap of Faith.  She is available and interested and so we invited Yuri Zbitnov, the drummer from the last LOF incarnation, and Steve Norton, the sax and clarinet player who played on my 1994 composition Expansions, to join the reformed band.

I encountered Glynis at a critical juncture in my musical development when I had been studying for many years but had yet to do much pure improvisation with skilled new music players.  She was an important part of the Masashi Harada sextet, a band we were both in for several years in the early 90s.  She had been around in the scene already for years and had already cultivated the musical language for improvisation that she still uses today.  To a significant degree, my mature musical language developed as a direct reaction to Glynis.  We developed a common musical space that we augmented with the other players in the various versions of LOF.

When we played again for the first time on 1/22/15, for me it was a transcendent experience – I was immediately able to enter the deep concentration trance state that one enters when playing with accomplished improvisers.  I had an immediate deep connection with Glynis and the rest of the ensemble.

So, I would say that we fell back into it with no special effort.  That very first new set is the title track Regenerations on the newly released Regenerations album.

I use the expression Pure Improvisation to describe our music.  It is pure in the sense that we have little or no discussion or planning prior to performance.

When you eliminate structural rules from music you must replace them with new rules for the music to be artistically successful.  Our improvisation methodology eliminates metric and regular time in addition to tonality and the melodic / harmonic relationships which have defined western music for hundreds of years.  We replace metric and regular time with rhythmic density and propulsion.  We replace Melodic / harmonic relationships with sonority.

Each performance of our music is a journey through a sequence of distinct sonorities with either gradual or abrupt transformations.  Over time, each version of Leap of Faith has developed a number of sonority states which become staple for that ensemble.  An example one from the current LOF is PEK and Steve Norton on very low clarinets playing slow low-pitch intertwining atonal melody with active / aggressive cello and percussion.

The new rules that inform the decision making of the musicians during performance are hard to articulate to outsiders, they are not written down or formalized, and the set of these rules is not closed (meaning unexpected or new rules may arise), but they are in effect while we play.  A rule is a decision making aide – given the sounds that are being made by the rest of the ensemble, what sounds could I or should I contribute to the overall group sonority?  However, three important structural devices contribute to the development of each performance and give a sense of some of the rules and how they operate.

Back in the day, in my busiest years, I performed about 30 or 40 times a year.  With the demanding job that I still have, there is no way that I can be that busy.  I envision 6-10 Leap of Faith performances a year.

I have this week finished scheduling our first two gigs for 5/5 and 6/16.  They will take place at the Lily Pad in Cambridge, which looks to be a good small venue for us to develop the new incarnation of Leap of Faith.

I plan to rent this room every two months on a Tuesday night for the whole night which will let me control the event.  We will emulate a performance paradigm we did many times at the Zeitgiest Gallery in Cambridge during the early period.  We will have two improvisation ensembles playing 3 sets – each band plays a set and then both bands perform together.  The larger ensemble LOF performances in the Evil Clown catalog almost all come from this scenario at the Zeitgeist.

The first gig on 5/5 will have as a Guest the New Language Collaborative - Glynis’s ongoing trio with Eric Zinman on piano and Sydney Smart on drums.

The audience for New Music is worldwide.  The audience in Boston is fairly small.  I want to use the internet, with articles like the one you are writing, and other press to make us more well-known to the people who like this music regardless of their locations.  There is plenty of our music for people to listen to.

My goal is to raise awareness of this group to the point where we can present it at the Stone in NYC.  My feeling is that LOF is a highly distinct mature improvisation ensemble that performs at the level of the other much more well-known ensembles that play at that venue.

The music of Boston's Leap of Faith is both easy and difficult to describe. I suppose I could string together some words like 'cathartic', 'intriguing', 'harrowing' and phrases like 'nightmarishly enthralling' and 'unexpectedly beautiful' and call it a day, after all, Leap of Faith is a fascinating and utterly unique group and those words work. But at the same time, they just don't quite capture the essence of this uninhibited music - and raw sound - that they make.

Though many musicians have passed through the ranks, at its core the group is the duo of woodwind player PEK and cellist Glynis Lomon, who both also add some pretty intense vocalization to the sonic palette. Joining them on the first half of the recording is Steve Norton on sax and clarinet and Yuri Zbitnov on percussion. However, on the second part of the album PEK and Lomon are joined by Mark McGrain (trombone), Craig Schildhauer (bass), Sydney Smart (drums), Laurence Cook (drums), Rob Bethel (cello) and Forrest Larsen (viola).

This new digital and CD-R recording, Regenerations, was made as they got back together to play in January of this year, the first get together after their initial run from 1993 - 2006. It sounds like they leaped right in without missing a beat (or totally missing one, perhaps). Starting with a low vibration from Lomon's cello and the saxophones of PEK and Norton, between whom there is quite an assortment of instruments, they dig in and go. Within the first few minutes of the track, the inventiveness of the group is on full display. Their sound is organic, it grows from within, and there is an arc to the track that belies either an uncanny connection or some pre-planned moves as there is an inherent structure and motion to the sound. That's the intriguing part, however, there is also the harrowing, which to me is found often when the wordless vocals appear, cutting clearly through the fabric of sound. The track will go from a reflective passage on a low woodwind to a dense thicket of cello double stops to juxtaposed harmonies, and just as quickly, it may delve into percussive textures and spontaneous intertwining melodies. It's this potent mix of instrumental timbers and unexpected changes that make their music so effective.

Following the first track (which clocks in at 43 minutes) are the three movements of "Subspace". The larger group's work with the expanded instrumentation produces something that is less dark, but a bit more fragmented. The interplay of horns and woodwinds also introduces a lot of counter motion. The second movement is 24 minutes and reserves the power of the band until about a third of the way through, when the drums and bass begin a sort of swing and strings rain glissandos. As the track progresses it's just as likely that the tempo or tone may dissipate as it will congeal, keeping the listener on their toes. This is one of the most captivating pieces on a dense album. Leap of Faith is not a group that provides music that is easy to digest - there is a lot to hear and it's music that requires your full attention.

Approach with open ears and patience and you will find a world that is as colorful and textured as the fractal images that adorn their album  covers. 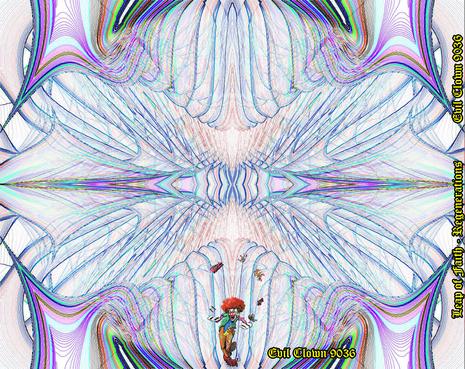 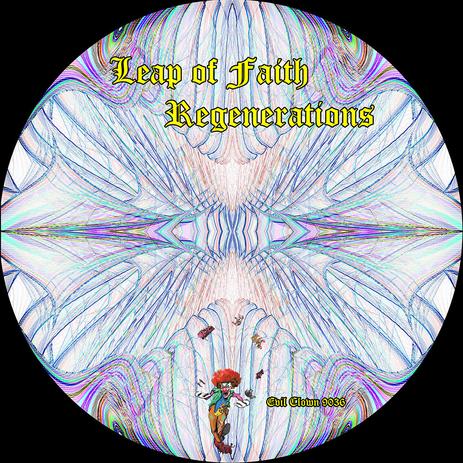 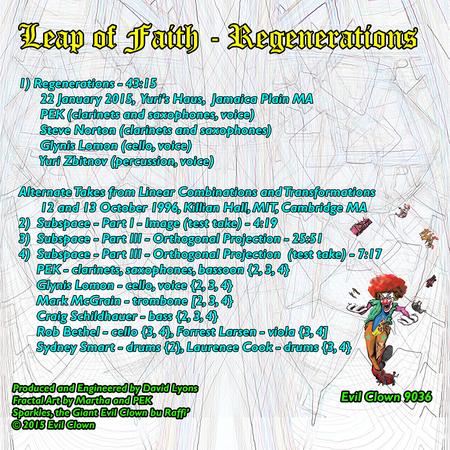 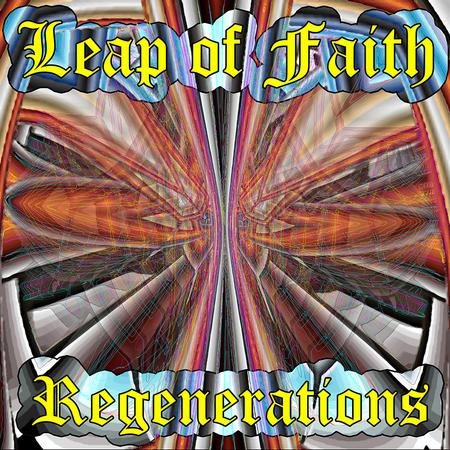