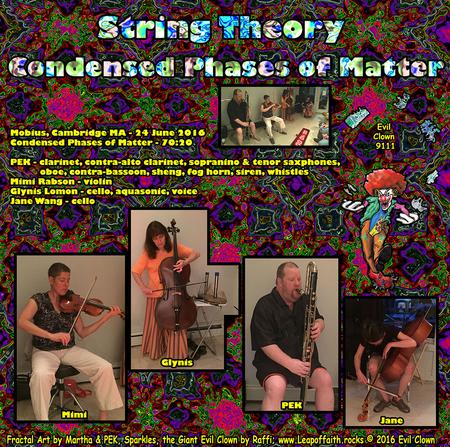 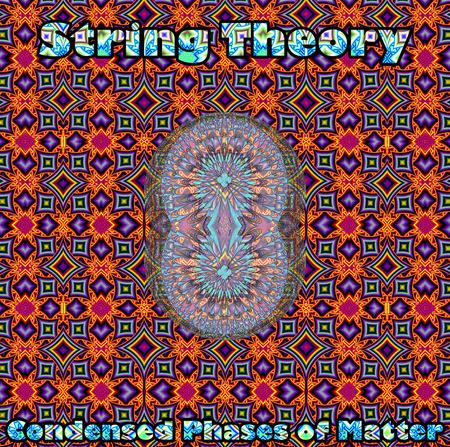 ​
STRING THEORY - Condensed Phases of Matter (Evil Clown 9111; USA) String Theory features Dave PEK on clarinets, sopranino & tenor saxes, double reeds, game calls, etc., Glynis Lomon on cello & aquasonic, Mimi Rabson on violin and Jane Wang on cello. String Theory is a quartet off-shoot of Leap of faith with two core members: PEK and Glynis Lomon. I hadn’t heard of Ms. Rabson before this but I do know Jane Wang from her work with Sabir Mateen.  This disc was recorded live at Mobius in Cambridge, MA in June of 2016, just last month. As with all or most Leap of Faith sets, this sounds mainly improvised and is one long 70 minute set. String Theory sounds like a modern string quartet with PEK’s various reeds replacing the viola. It is always nice to hear an aquasonic or waterphone, a sort of bowed vase with water inside which changes the tonality. It works well with the other strings and reeds. There are some especially magical sections where the three strings and double reed (oboe or bassoon) sound especially strong together, creating odd slight off-balance vibes, like drifting on a calm ocean which slowly becomes more turbulent as times goes on. PEK usually works on one of dozens of reeds at a time, concentrating on each one as he solos or interacts. Both cellos sound great when they deal with those deep, lower tones. This disc contains some of the best, most engaging strings and reeds quartet music I’ve heard. Most often quite mesmerizing. - Bruce Lee Gallanter, DMG