Live at Mass College of Art 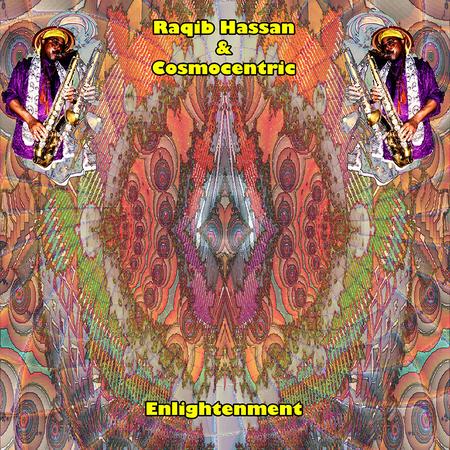 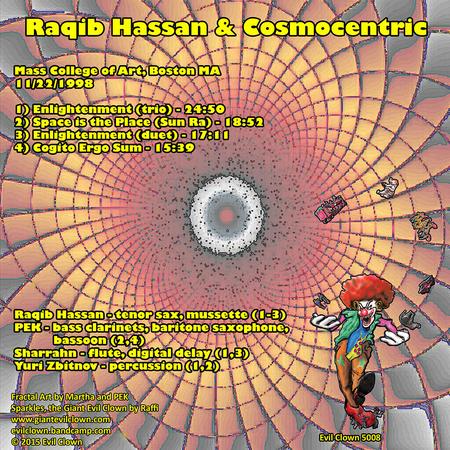 RAQIB HASSAN & COSMOCENTRIC - Enlightenment (Evil Clown 5008; USA) Featuring Raqib Hassan on tenor sax & mussette, PEK on bass clarinets, bari sax & bassoon, Sharrahn on flute & delay and Yuri Zbitnov on percussion. I recently reviewed two discs from Raqib Hassan, a Boston-area based saxist who is highly influenced by Sun Ra, both discs were tributes to the mysterious Mr. Ra. This disc features just a quartet ( as opposed to the octet of the other discs) and was recorded at the Mass College of Art in November of 1998. This is the smallest number of musicians for anything that has been released & reviewed on the Evil Clown label. Once Mr. Hassan covers a Sun Ra song, the call sic, "Space is the Place". Unlike Leap of Faith, who do their best to provide nightmarishly intense free/music improvisations, Mr. Hassan's music has a somewhat more calm and spiritual center. The long opening track, "Enlightenment," flows nicely with two saxes, flute and minimal percussion. The music reminds me of one of those more laid back Pharaoh Sanders sessions from the late sixties but without any screaming saxes. Longtime Leap of Faith drummer, Yuri Zbitnov, is in fine form here playing some superb, mallet-work, sometimes sublime and rich in nuance. Mr. Hassan's warm toned tenor and flutist Sharran, who uses a an echo device and does a great job of adding several layers of lines like bees buzzing around a hive. "Space is the Place", a fave Sun Ra tune of many, starts with with fine, sly snake-charming mussette (middle-eastern double reed), before spinning out to space in a frenzy activity and chanting, "The skies are always blue on Jupiter". Another swell, cosmic classic from the inspired crazies at Evil Clown enterprises.