Featuring Steve Swell on trombone, PEK on clarinets, saxes, double reeds, taragato, metal & voice, Glynis Lomon cello & voice, Steve Norton on clarinets & saxes and Yuri Zbitnov on drums & metal. In August of this year (2015), the Boston-area based group Leap of Faith came to New York for a weekend to play two gigs. On Saturday, they played at the New Revolution Arts series in Brooklyn and on Sunday at DMG. Both nights followed the same format of Leap of Faith proper, a guest playing solo and then the guest & Leap of faith playing together. This disc features a solo set from Steve Swell and another set with Leap of Faith and Mr. Swell together. The opening set by Leap of Faith alone is found on another recently released CD.

You can tell that this group has been playing for many years since they have their own distinctive sound. Alien yet familiar, bizarre yet completely fascinating. Expanding, contracting, erupting, settling down, always as one force. Mr. Zbitnov is in fine form here on drums, the center of the storm directing the energy of flow as it soars and then comes back down to the earth. There is an incredible section here that is over-the-top yet knows when to let up before it evolves into some crazed screams. The audience for this set was perhaps 10 to 15 folks. We all knew something special, transcendent was happening. This disc captures that set just right. Lucky us. Out of their dozens of discs, this is one of the best! - Bruce Lee Gallanter 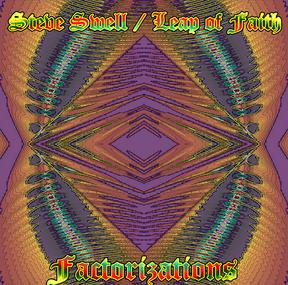 The full-band segment is a fully free outburst with great color and contrasts born of the intersection of Swell, the reeds, cello and percussion. The out-lining group phrasing is expressively advanced, noisy at times in the best sort of way, and filled with an excellent give-and-take. Swell spurs on Leap of Faith to their best and vice-versa. This is a fine excursion into collective breadth and musical avant power. 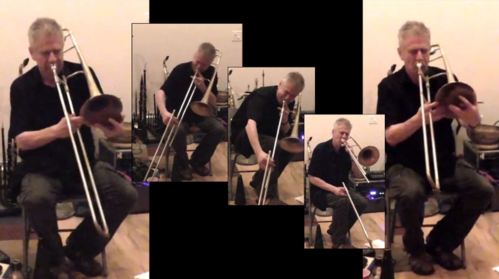 If you soar with out collectivity and appreciate it when the architectural inventiveness of such things reaches orbital heights, this one is for you. And of course if you appreciate great trombone in the zone, this puts Steve in a good place as well. More!

You can find this on Bandcamp among other places.

Leading avant jazz trombonist Steve Swell joins together with the Boston-based Leap of Faith group for Factorizations (Evil Clown 9075). The set was recorded at New Revolution Arts in Brooklyn in August of 2013.

Essentially Steve gives us a wide-ranging unaccompanied solo for the first half and Leap of Faith joins him for the remainder. Pek is the ensemble's leader and plays clarinet, a variety of saxes, voice, etc. Glynis Lomon is on cello and voice, Steve Norton is on clarinets and saxes and Yuri Zbitnov appears on drums and metallic objects.

The Swell solo segment gives Steve plenty of space to work out sound-color effusions and then some soulfully out motives, reminding us why he remains a central figure on New York's new jazz scene.