LEAP OF FAITH [PEK/GLYNIS LOMON et al] - Linear Combinations And Transformations: The Alternative Takes (Evil Clown 9037; USA) Featuring:  PEK [Dave Peck] - saxes, clarinets, bassoon, Glynis Lomon - cello, voice, Mark McGrain - trombone, brass, Craig Schildhauer - bass (2 tracks), Rob Bethel - cello (1 track), Forest Larson - viola (1 track) and Sydney Smart or Laurence Cook - drums (1 track each, 1 track with no drums). This disc consists of three long pieces recorded in October of 1996 at Killian Hall at MIT in Cambridge, MA. This is an altered version of Leap of Faith with brass man Mark McGrain taking the place of reedman Steve Norton who is another longtime and current member. The original core members, PEK & Glynis Lomon remain with 2 strings added on one track and one of two drummers on one track each, a bassist on two tracks as well. Three long pieces make up this 70+ minute disc. Elder Boston drummer Syd Smart, who once worked with Sam Rivers and Ted Daniels plays on the first track and adds his own rhythmic flourishes, making this piece the most jazzy in sections when they are soaring quickly. The second piece, "Subspace Part 2"  is just the trio (PEK, Lomon & McGrain) with no drums or strings. This piece is more restrained and cerebral with some spirited interaction between the reeds, cello and trombone. The third piece, "Orthogonal Projection", includes bass, two strings and another elder Boston-based drummer named Laurence Cook (for Bill Dixon, Burton Greene & Paul Flaherty). The drums are often at the center of this septet version of LoF.   PEK is playing some low-end reed, bari sax or (contra?) bass clarinet which sounds great with the cello and trombone. The group soars through a long section with the bass and drums pushing the cello, reeds and trombone higher and higher. The other strings don't enter til midway, adding their flurries as the piece evolves through more somber and more frenetic interludes. Even in their early days, Leap of Faith have worked their way through an organic method of improv which works well no matter who is playing with them, both core members and guests. - Bruce Lee Gallanter, DMG 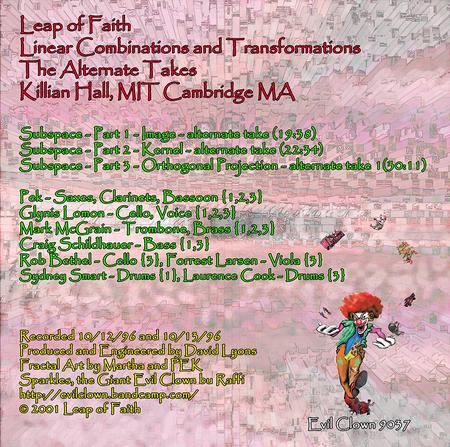 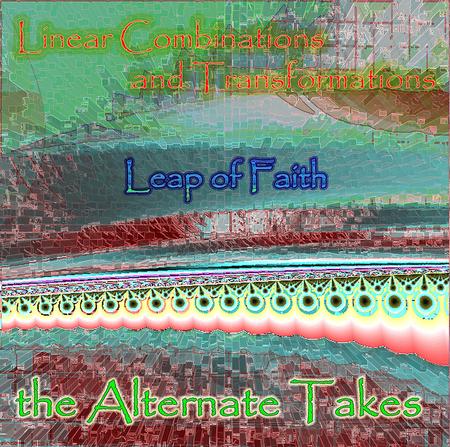