​Reed jazzman PEK has been quite prolific making avant jazz happen up in Boston with his two ensembles. Today we hear a CD of characteristically interesting music played by his Leap of Faith outfit with guest Thomas Heberer, Solution Concepts(Evil Clown 9076).

It is a full set recorded live at New York's Downtown Music Gallery last August. The outer numbers are long improv tracks with Heberer on cornet for the latter, plus PEK on tenor, piccolo oboe, clarinet and contra-alto clarinet. Glynis Lomon is on cello and aquisonic, Steve Norton on sopranino, alto clarinet, and alto sax. And Yuri Zbitnov is at the drums with resonant metal objects adding to the sound.

This is full-blown free outness in the grand tradition, spontaneous outbursts of individual and collectively free sound with all playing and hearing one another to create shifting constellations of aural expression. Thomas Heberer enters following the first long improv for a series of unaccompanied solos. Thomas shows us his smartly expressive way in a kind of tour de force of melodic invention.

The final number is a twenty-minute conflagration of Heberer and Leap of Faith joined together. It gives the entire ensemble space to open up worlds of improv and at the same time gives space as well for Heberer's voice to respond to the others and vice versa. The track has a great deal of strength and shows the complete complement of artists at their best.

All in the end is worthy ear fare. It is a fine example of Leap of Faith in its current guise and Thomas Heberer in an inspired frame of being, both with and without the ensemble.

​"Solution Concepts" captures most of the entire evening at DMG and is 79 minutes long. On the first set at DMG, which is called "Subgame", the quartet are more restrained than they were on Saturday night things started out explosively. Being able to watch who did what was a good thing since there were some visual things going on, like Ms. Lomon standing while she played the cello. It is rare for anyone (except perhaps Anthony Braxton) to play reeds like piccolo oboe, contra-alto clarinet or alto clarinet, so it was great to watch/hear someone solo on those instruments.   You can hear that these folks have been playing together for a long while since they have a focused group sound. Everyone in the quartet was integral to the sound and approach of what makes Leap of Faith unique. Each member got their chance to stretch out and shine. Drummer Yuri Zbitnov was especially amazing at a few points spinning several rhythmic lines or weaving odd textures in the right places. The central section of this disc features four solos from ace trumpeter Thomas Heberer, who was in fine form that night, somewhat restrained yet still quite enchanting. The picture of Mr.  Heberer on the back cover crouching with his trumpet held high captures him in a cosmic pose. One of the things I love about this band is/are the strange vocals which always add a bizarre alien presence that makes them quite unique.

​LEAP OF FAITH/THOMAS HEBERER - Solutions Concepts (Evil Clown 9076; USA) Featuring Leap of Faith members: PEK on tenor sax, piccolo oboe, contra-alto clarinet, Glynis Lomin on cello, aquasonic & voice, Steve Norton on soprano sax, alto clarinet & alto sax and Yuri Zbitnov on drums & metal plus special guest Thomas Heberer on cornet. These two plus sets were recorded right here at Downtown Music Gallery in Chinatown, NYC, a couple of Sundays ago on August 16th, 2015. Leap of Faith are a Boston-area based improv ensemble that have been around for a few decades with two constant members PEK (Dave Peck on dozens of reeds & metal percussion) and Glynis Lomon (on cello, aqua sonic & voice) plus assorted musicians like Steve Norton (other reeds) and Yuri Zbitnov (drums & percussion). Although Leap of Faith took a hiatus in the 00s when Mr. Peck was tied up with his real job, they have recorded and released all or most of the sets through the years. DMG lists 23 CD-Rs by Leap of faith, although there appears to be more than double of that amount. A couple of weeks ago, Leap of Faith did a mini-tour of NYC, playing at New Revolution Arts in Brooklyn on Saturday (8/15/15) and here at DMG on Sunday. After reviewing more than a dozen discs from this unit for the DMG newsletter & database, the word is out: a handful of the New Music die-hards showed up for one or both sets.  Each of the four sets they played over two nights were spirited, weird and immensely different. Although both nights had a similar format (LoF/soloist/LoF with soloist added), each night evolved in a different way. 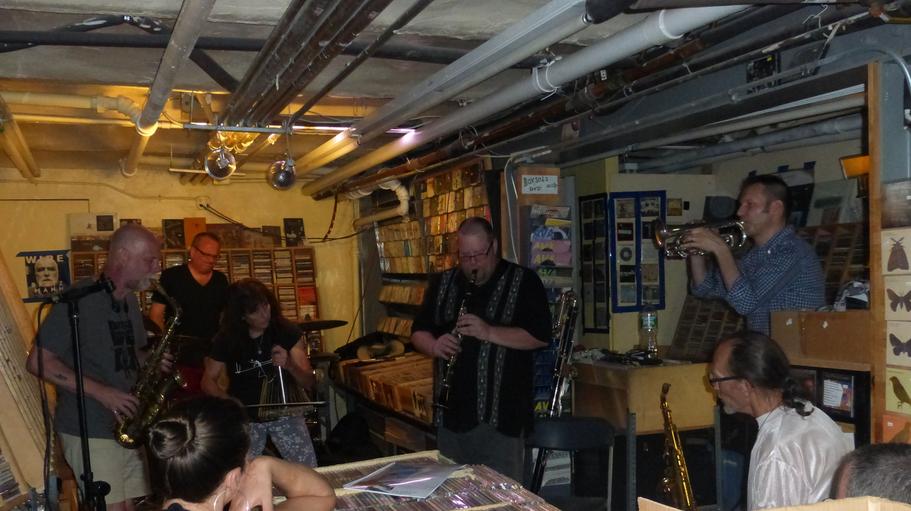 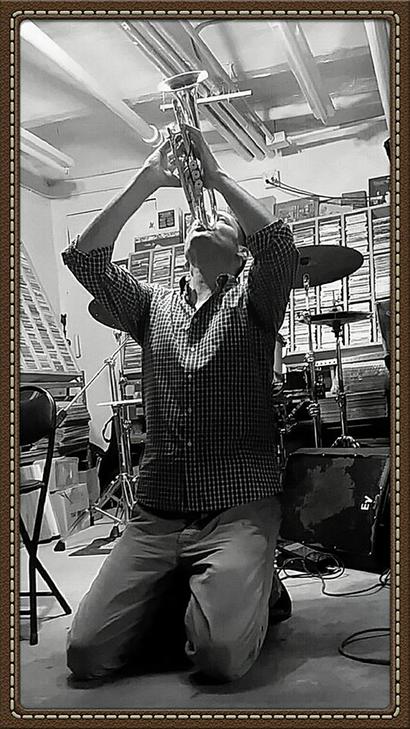 ​​​
The twenty year history of Leap of Faith includes an eleven year hiatus that is noteworthy more for the cooperative's ability to seamlessly pick up the pieces than for an uber-extended break. Cellist Glynis Lomon—a one-time student ofBill Dixon—was working the Boston circuit with multi-reedistPek in the 1990s. The two honed their far reaching technical skills taking them into the Leaping Water Trio, a precursor to Leap of Faith whose 1995 debut included trombonist Mark McGrain and occasional guests.

A rotation of group visitors, with PEK and Lomon always at the center, along with multimedia performances, marked the continued artistic development of Leap of Faith until 2003. PEK left behind his day-to-day music career while Lomon remained involved with other projects, most notably Dixon's Tapestries for Small Orchestra (Firehouse 12, 2009) along with brass masters Stephen Haynes, Taylor Ho Bynum and Rob Mazurek and bassist Ken Filiano. In early 2015 PEK and Loman reunited to perform with the original members of Leap of Faith while lining up a new formation to include saxophonist/clarinetist Steve Norton, and drummer Yuri Zbitnov.

Sharing the billing on Solution Concepts is trumpeter Thomas Herberer who adds significant contributions on five of the six tracks. The album was recorded live at the Downtown Music Gallery in the Chinatown neighborhood of Manhattan on August 16th, 2015. Starting out and fits and starts like an extended warm-up, "Subgame" doesn't take much of its almost forty minutes to be convincingly harrowing. With barely the trace of a melody, the marathon number nevertheless captures some satisfying but inexpressible spirit of wild abandon. In very sharp contrast, Heberer joins the group on "The Great Hill," a study in finely developed improvisation with his solo cornet soulfully expressive.

"Teodoro" takes yet another tack as the experimental piece consists of noises drawn from the musicians pushing their instruments beyond their normal range and augmenting with distorted voices. The brief "Mongezi" and "Loose Ends" again feature Heberer and are less structured than "The Great Hill." Bookending the middle four tracks—all written by Heberer—is another extended improvisation, "Information Sets," clocking in at over twenty minutes. Ranging from a whisper to near-chaos, the piece is strangely musical with Zbitnov's thundering beat supporting approximations of bagpipes and ethereal voices.

Considering the relatively brief number of years that Leap of Faith were actively recording, their output has been prolific and varied. PEK and Lomon have worked in formations from duo to large ensembles. Heberer's presence on Solution Concepts makes it quite different from earlier Leap of Faith albums but true to the experimental vision that PEK and Lomon first realized more than twenty years ago. The music on Solution Concepts is probing, intelligent and—in some instances—poignant.