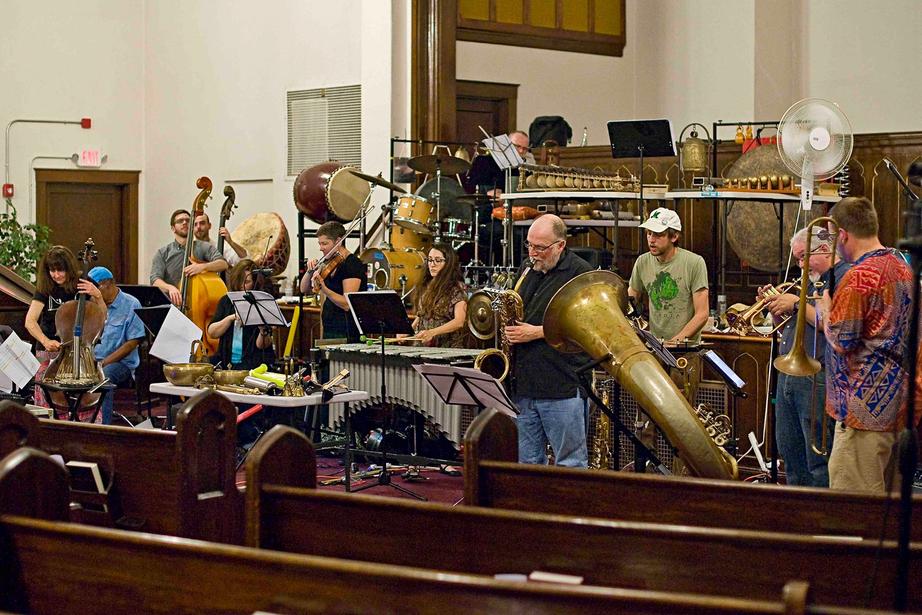 Do not be deceived by two songs. This CD is 90 minutes of pure improvised bliss. Free jazz, noise, rock, it’s all here, but mostly free jazz. This might be among the “free-est recordings I have ever heard, right up with Arthur Doyle, Albert Ayer, or Henry Cow. There are so many musicians, and so many instruments, that it is difficult to keep track of what’s going on. This is a fantastic, amazing record. I suggest you check out some of their other recordings online. The Expanding Universe is not easy listening, but the patient listener will be rewarded. 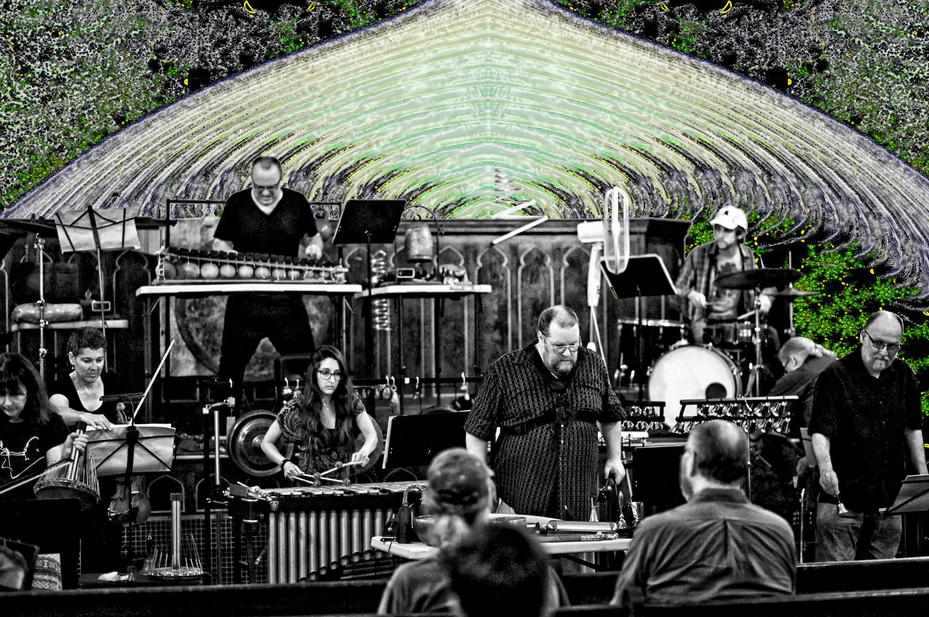 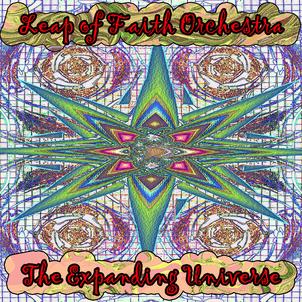 LEAP OF FAITH ORCHESTRA - The Expanding Universe (Evil Clown 9110; USA) The Leap of Faith (LoF) ensemble, which usually has 4 or 5 members, has been expanding over the past year. Often LoF play double bills with another sympathetic ensemble, each group playing their own set which is followed by a combined group set. This set by the Leap of Faith Orchestra took place just last month, June 4th of 2016. The usual Leap of faith cast was there:  PEK (multiple reeds), Glynis Lomon (cello), Steve Norton (reeds) and Yuri Zbitnov (drums) was joined by 11 more part-time members:  Syd Smart (drums), Charlie Kohlhase (saxes), Andria Nicodemou (vibes), Mimi Rabson (violin), Clara Kebabian (violin), Bob Moores (trumpet), Dave Harris (tuba), Peter Cassino (piano), Tony Leva (bass), Brendan Higgins (bass), and Kevin Dacey (drums, percussion).  Rather than be totally chaotic, LoF leader Dave Peck, actually wrote a score which is described here: “The orchestra work (The Expanding Universe) uses a score which is simultaneously a Density and Sonority map prescribing the improvised development of the work. Written English descriptions of the overall sonority desired are given durations for each player on their part along with direction on when to play and when not to play. Players track the elapsed time with a large digital sports clock. This system allows me to compose detailed events without having to notate pitches or rhythms which would require significant rehearsal to accurately achieve. Skilled improvisers, like the ones I have recruited, can easily follow these instructions to create a highly structured improvisation without the need for specific rehearsal even when the ensemble is quite large as it is here.”

The results are pretty extraordinary. The work is very long, nearly 77 minutes and goes through different sections. The music sounds directed since it moves in precise waves with different subsections rising and falling back into the often turbulent sea of sounds. A number of different things stand out: an intense free piano solo (Peter Cassino), a layer of brass waves sailing with another layer of twisted reeds, sporadic double rhythm teams (tablas?), erupting and then disappearing. The balance of more sparse sections with occasional dense outbursts sounds tightly directed.  Considering that the Evil Clown label which documents all of the Leap of Faith and their offshoot projects, is closing in at nearly a 100 releases, this disc might just be the best one I’ve reviewed. A completely outstanding effort all the way around. - Bruce Lee Gallanter, DMG

The creative music cooperative known as Leap of Faith had a long initial run from 1993 to 2001 and then re-booted in 2015. At their core, from the beginning, have been multi-instrumentalists David Peck (aka PEK) and Glynis Lomon. PEK, however, assumes a more than democratic leadership role across the many manifestations of the collective that live on his Evil Clown label. On The Expanding Universe the Leap of Faith Orchestra—true the album title—escalates with full (but non-conventional) ensemble of fifteen.

At fifty-thousand feet, one could describe the overall vibe of The Expanding Universe as running the gamut from melodic to shambolic. The latter perception may be driven by the presence of more than four-dozen instruments/devices in the hands of these fifteen artists. The sole track (being the title track) is a sprawling epic at seventy-seven minutes and does indeed deviate between the austere and the chaotic, but as always, composer PEK has a higher purpose. Swerving whistles and a siren usher in the piece with no small amount of urgency building to a crescendo of noise before a lone tuba replaces near-calamity with dark mystery. Later, piano and alternate devices struggle for dominance, lopsided melodies collide with bells, blocks and cymbals in a musical representation of the album's stated theme.

PEK and the Leap of Faith Orchestra collectively have the gift of being able to discover music where it lives and one would be justified in believing that they could find aesthetic value in the rhythm of windshield wipers as certainly as with a saxophone. The Expanding Universe only marginally revolves around recognizable spheres like the bass, vibes or cello. There are nebulas of boomwhakers, fog horns, sirens and pieces of metal attracted by the gravitational pull. Like any uncharted exploration, attention to detail makes this experimental journey a memorable experience.

The Expanding Universe by The Leap of Faith Orchestra, is one of several groups led by Dave Peck. In his own words, here’s how he describes these projects:

“I have had an improvisation ensemble called Leap of Faith with cellist, Glynis Lomon and a variety of other folks since the mid-90s. During the 00s and until 2014, I took a long break while my day-gig interfered with my ability to do music on my terms. Since reforming Leap of Faith in January 2015, I have substantially expanded the group to the Leap of Faith Orchestra. LOFO is comprised of 5 sub-units that can play independently or in combination. Any two or more of these units together are the LOFO.” — Dave Peck

“I also have another brand new unit, Mekaniks, which emphasizes the electronics including samples and altered samples from the Evil Clown catalog driven by a laptop. The full orchestra (with all 5 sub-units) had its first performance on June 4, where we played my composition, The Expanding Universe. The composition does not specify notated melodic or rhythmic information, just durations (by time indices) and English language descriptions of the overall sonority desired. This allows me to plan very detailed compositional events without the need for extended rehearsal. To prepare for this concert we did lots of sessions and performances with each of the sub-units and with each of the other sub-units combined with core Leap of Faith.” — Dave Peck

As for the music, it will strike some as shades of experimental or modern classical. The opening gong rings of Dark Matter are an omen of things to come. There are multiple instruments simultaneously assaulting the senses. I’m hearing someone swinging a twirling tube, one of my favorite devices that I use at my live shows. The sounds of vibes, bells, piano and more are coming at the listener unexpectedly with a specific purpose. Dave Peck carefully selects each instrument for maximum effect!

As the music proceeds, the overall timbre takes on shades of Sun Ra & His Arkestra’s outer space explorations. This territory is familiar to most listeners of free jazz. After the six-minute mark, the music starts to percolate, moving the music into a much freer space. The orchestra reaches a peak around eight minutes and the sounds that follow are reminiscent of Tibetan music. If you’ve heard a CD or vinyl recording of Tibetan recordings, you will recognize the tonality immediately. Dave Peck skillfully directs the horns over this gentle mayhem, thus creating a series of polyphonic tone layers. With all of these sounds in motion, it’s fairly easy to get lost on this trail of sonic pulses.

Even with such a large body of mass abstract poly-phonics, there is an order to the chaos within the music. From eleven minutes on, the piano players push the group in the direction of Cecil Taylor. There are multiple influences within this body of sounds. The interplay between the piano and the bass is interesting. Without the drums playing, the space is left open for these instrumentalists to explore the music at length. The music is able to fully breathe. The layer of density between the horns and the percussion section is what John Coltrane called on one of his albums, “Cosmic Music.” The music is very out there in every sense of the word. Each individual member contributes to this open cosmic space with shades of Charles Ives thrown in for good measure. The tuba lines really bring out this quality around the twenty-two minute mark. The lines creep in gradually making its presence felt throughout the entire orchestra. It isn’t until the twenty-four minute mark, the lines becomes dominant within the mild chaos, while the trumpet lead acts like a hang glider, soaring over the musical landscape.

As Dave Peck explained earlier, “The composition does not specify notated melodic or rhythmic information, just durations (by time indices) and English language descriptions of the overall sonority desired.”

The melodic lines aren’t the traditional melodic lines one would expect. Instead, we have a highly experimental approach applied to this orchestra on a very large scale, given the number of musicians on this recording. The lines intersect, as well as go off in divergent directions. There is very unusual counterpoint lines employed throughout this lengthy piece. The drums rumble in the background intensifying the mood. I must add, the drumming was consistently outstanding throughout this hour plus performance. The music continues to ebb and flow, while the piano player again evokes the approach of Cecil Taylor. While this section started off slowly, it gradually builds like water starting to boil. It doesn’t quite reach such a fevered pitch of 212 degrees Fahrenheit. The intensity remains silently hidden, but very much felt. Next up, is the string section. The upright bass stands out for the most part, however, the strings are active during this part, along with an occasional horn player soloing here and there.

The music is partly improvised and written? At times, it’s hard to tell where the improvisation ends and where the written notation begins. It’s such a blur of different dynamics at work. The music takes on the quality of a cosmic soup. This makes the Leap of Faith Orchestra stand out from most jazz ensembles. What Dave Peck has put together must be quite an experience to see and hear at the live shows.

At the one hour mark, the music gets even more experimental. The orchestra ventures into electronic music in the science fiction sense of the word. The electronics draw from sounds heard in science fiction films from the fifties. This is followed by more exploratory output from members of the orchestra. The piano player takes over and does a short captivating solo. It’s always very engaging when these piano sounds are brought to the front and center. The Leap of Faith Orchestra tends to lay low supporting the space during this musical interlude. The orchestra is now coming into the home stretch, nearing the end of this performance.

If you’re not familiar with the music of Dave Peck, do pick up a copy of this CD and his many other recordings. I believe he has one of the most adventurous orchestral ensembles in free jazz.